Pearl of the Main River 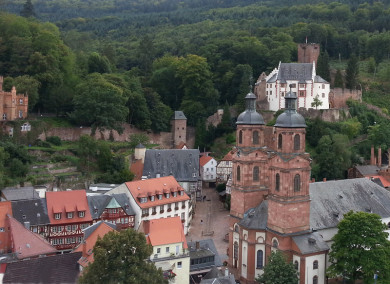 The enchanting town Miltenberg lies between the foothills of the Odenwald and Spessart. The visitor is primarily fascinated by the timber framed buildings along the river Main.
Miltenberg was first mentioned in records in 1226, it’s history started in the black quarter "Schwarzviertel" beneath the "Greinberg" the oldest part of the town. Historically Milten-berg was favored by its location at various main trade routes to Frankfurt and Nürnberg and thus grew to become a rich town with commerce, trade and viticulture. But the “Thirty Years' War” with its sieges, plundering and plagues caused the economic collapse. The population was decimated by half and many of the timber framed houses fell into ruin or were destroyed.
After this, Miltenberg's commerce recovered only slowly. Because of inventions like the railway and motor vehicles, people weren't forced to make a stop in Miltenberg and so it lost its commercial relevance. But the preserved beautiful medieval timber framed houses and other sights made our town an appealing tourist attraction. Bikeways and hiking trails invite for day excursions to the Spessart and Odenwald. Museums, monas-teries, fairs, wine and beer festivals offer recreation activities all year long.
﻿