The Baroque Town in the Odenwald 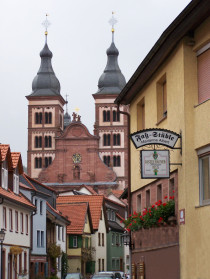 Vew to the Abby

﻿The visitor finds the historic baroque town Amorbach surrounded by the hills of the Odenwald. The natural park "Bayrischer Odenwald" surrounds the small climatic spa with about 5000 inhabitants in the "Dreiländereck" (the corner where Bavaria, Hessen and Baden-Wuertenberg meet). Around A.D. 730 Irish monks made a pilgrimage to the small village called "Amersbach" and settled there. They built a plain chapel by the name of "Amorsbrunn", which became famous for its special spring water. The legend says, that the holy Amor himself founded the monastery and later the town was named "Amor-bach".
Later the Benedictine Abbey was erected in the midst of Amorbach. In the 18th century the abbey was rebuilt and restyled. Back then the Stumm brothers built the world-famous largest "Stumm Organ". It is still played every day and attracts visitors from all over the world. The convent building was put up next to the abbey during the same pe-riod. Here you find the monastery's library with about 30,000 books and the "Green Sa-loon", which is still used on festive occasions. In 1803, during secularization, the land around Amorbach was awarded to the "Leiningen" dynasty, including the abbey and monastery. Until today, some members of the princely family live in their residence in Amorbach.
Amorbach's special attractiveness today originates in its medieval flair. The town's small alleys carry the visitor back to an idyllic-romantic medieval time. Starting at the Museum, to the old town hall, the catholic baroque church "St. Gangolf", the Templar house and to the "Seegarten" – beautiful timber-framed houses all along the way. Various places of excursion in and around Amorbach let the time of your stay fly by...
﻿